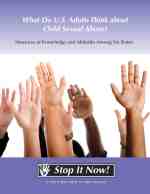 What Do U.S. Adults Think About Child Sexual Abuse?

Between 1995 and 2007, Stop It Now! and its local program affiliates commissioned ten telephone surveys to gauge adult knowledge and attitudes on the issue. The report, What Do U.S. Adults Think about Child Sexual Abuse? Measures of Knowledge and Attitudes Among Six States, summarizes key findings and program implications from an analysis of a new, statistically valid, national dataset of over 5,000 US adults.

1.    How were the surveys conducted?

With its local affiliates Stop It Now! participated in implementing ten random digit dialed (RDD) telephone surveys of adults to gauge the adult public’s knowledge and attitudes about child sexual abuse prevention. These surveys were conducted by professional market research firms in six states between 1997 and 2007. Stop It Now! hired a public health trained statistician and applied researcher to compile the data from these RDD phone surveys into a single, statistically-valid and representative dataset that includes a total sample of 5,241 U.S. adults.

Survey respondents represent a cross section of everyday people in six states covering three regions of the U.S. The states surveyed correspond to where independent, local Stop It Now! programs were located. For most categories, the sample is fairly comparable to the most recent U.S. Census data. Those interviewed included 61% women and 39% men, which is fairly typical of telephone surveys.

2.    Why are the samples sizes different on each question?

Local programs had some autonomy in which questions to ask but were encouraged to use the same core questions so that a national database could be established to compare to other research results and to further the field of knowledge. However, because not all local surveys included every core question, many variables had different sample sizes.

3.    What demographic data was collected from respondents, and what differences were shown based on demographics?

Some demographic data were collected, including gender, education level, relationship status, ethnicity and others. However, not all sites captured all of the demographic variables. Significant differences in responses by demographic groups were found. For example, men and women answered questions most questions differently, as did those adults who experienced or did not experience childhood sexual abuse. Differences in responses along demographic lines are not addressed in the report, but can be found in the Executive Summary of the original results of analysis report.

4.  What was the impact on demographics of all the sites not asking the same questions?

OF the demographic data collected, the sample is fairly comparable to the most recent U.S. Census data. Weighting of the data by demographic characteristics was explored but disregarded since most variables showed strong statistical relationships regardless of weighting.

5.    Does this data show change over the 10 years since the first survey?

No. This is not a longitudinal study. It does not measure change over time. Analysis of this dataset is strictly cross sectional. It only measures a point in time. Since the span of time from the first to the last survey is ten years there is a possibility that respondents' attitudes would be slightly different.  Even so, this would not change the outcomes substantially.

6.    What was the breakdown on responses on whether child sexual abuse was a problem in their community?

7.    Did any questions ask about the response of authorities (e.g., police, child protective services) to abuse or what happened after reporting?

No. The original survey guide was initially developed in 1995 and was subsequently changed somewhat by each local program. There were many other possible questions that were not asked due to the time constraints of 15 to 20 minute phone interviews or due to the programmatic needs of each affiliated program.

8.    Is there more data than was presented?

Yes, the published research report summarizes and explains only the most important findings. We have made available to the public the Executive Summary of the consultant's original results of analysis report.  There were other survey questions that were not included in the creation of the national dataset because of too much variation in survey question wording across local surveys.

9.    What is treatment for sexual offending, who gets it and does it work?

Or visit the Association for Treatment of Sexual Abusers.

10.    What would stop someone from reporting possible child sexual abuse?

From surveys, focus groups and the Helpline, we know that adults face many barriers to taking action to prevent abuse before a child is harmed. Some of these barriers are listed on page 9 of the research report.